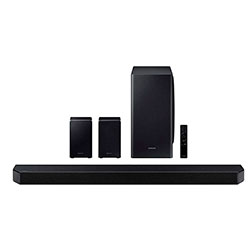 The present review is aimed to compare two soundbars - Samsung HW-Q950T vs Sony HT-Z9F that are meant to satisfy the needs of cinema and music lovers. Based on our rating, HW-Q950T has a total rating of 8.4 out of 10 versus 7.2 for HT-Z9F. The competitors' control buttons are different: multi function, volume down, volume up, microphone and power, input, Bluetooth, music service, volume down, volume up, respectively.

Both soundbars have active amplification type. A significant difference between the units in the number of channels, the Samsung HW-Q950T has 9.1.4 versus 3.1 for the Sony HT-Z9F. The output power is different and equal to 546 (overall) W for the HW-Q950T versus 400 (overall) W for the HT-Z9F. Competitors do not have a built-in subwoofer. Rivals have wireless connection to separate subwoofer. The Samsung HW-Q950T got our rating of 9 out of 10, and the Sony HT-Z9F 7 for its audio features and specs.

These models have the ability to connect to the Internet via WI-FI. Rivals from our review have Bluetooth support. The Samsung HW-Q950T has 2/1 HDMI inputs/outputs versus 2/0 of the Sony HT-Z9F. The HDMI Audio Return Channel (ARC) feature supports both devices. Both soundbars have a USB connector. For connectivity, each of the soundbars received a rating of 8/10.

Both devices have support for Dolby Atmos multichannel audio format. The surround sound technology DTS:X is supported by devices under review. For multichannel surround Samsung HW-Q950T got a rating of 9, and Sony HT-Z9F 8 out of 10.