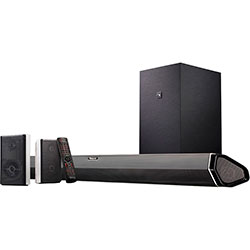 It makes sense comparing LG SN8YG vs Nakamichi Shockwafe Pro 7.1 because they both are able to give some premium features. Based on our rating, SN8YG has a total rating of 6.8 out of 10 versus 7.8 for Shockwafe Pro 7.1. The competitors' control buttons are different: power, volume down, volume up, function, play/pause, microphone and power, source, demo, volume down, volume up, respectively.

Both soundbars have active amplification type. A significant difference between the units in the number of channels, the LG SN8YG has 3.1.2 versus 7.1.4 for the Nakamichi Shockwafe Pro 7.1. The output power is different and equal to 440 (overall) W for the SN8YG versus 600 (overall) W for the Shockwafe Pro 7.1. Competitors do not have a built-in subwoofer. Rivals have wireless connection to separate subwoofer. The LG SN8YG got our rating of 7 out of 10, and the Nakamichi Shockwafe Pro 7.1 8 for its audio features and specs.

Soundbars do not have AirPlay support. Spotify support is available on the Shockwafe Pro 7.1.

Only the LG SN8YG can connect to the Internet via WI-FI. Rivals from our review have Bluetooth support. The LG SN8YG has 1/1 HDMI inputs/outputs versus 3/1 of the Nakamichi Shockwafe Pro 7.1. The HDMI Audio Return Channel (ARC) feature supports both devices. Both soundbars have a USB connector. For connectivity, each of the soundbars received a rating of 8/10. App control is available for the SN8YG. A built-in microphone is present only on the SN8YG. Soundbars do not have Multi-room support.

has not
Pandora, SoundCloud