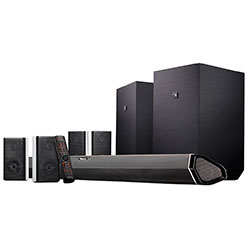 The present review is aimed to compare two soundbars - Nakamichi Shockwafe Ultra 9.2 vs LG SN8YG that are meant to satisfy the needs of cinema and music lovers. Based on our rating, Shockwafe Ultra 9.2 has a total rating of 8.2 out of 10 versus 6.8 for SN8YG. The competitors' control buttons are different: power, source, demo, volume down, volume up and power, volume down, volume up, function, play/pause, microphone, respectively.

Soundbars do not have AirPlay support. Spotify support is available on the Shockwafe Ultra 9.2.

Only the LG SN8YG can connect to the Internet via WI-FI. Rivals from our review have Bluetooth support. The Nakamichi Shockwafe Ultra 9.2 has 3/1 HDMI inputs/outputs versus 1/1 of the LG SN8YG. The HDMI Audio Return Channel (ARC) feature supports both devices. Both soundbars have a USB connector. For connectivity, each of the soundbars received a rating of 8/10. App control is available for the SN8YG. A built-in microphone is present only on the SN8YG. Soundbars do not have Multi-room support.